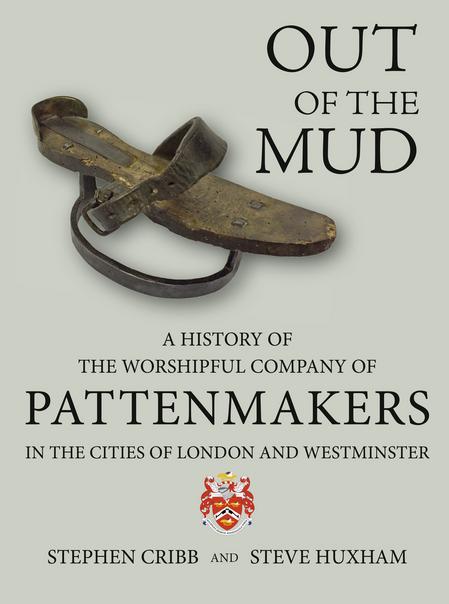 out of the mud

A History of the

The first Company History of the Worshipful Company of Pattenmakers was published in 1926 and has since been revised and updated twice, in 1962 and 2003. Out of the Mud is a complete re-write and adds chapters on the history of Pattens and Pattens around the world as well as revealing some of the curious – and sometimes ‘interesting’ – goings-on in the Livery. Even the eating habits of Pattenmakers over the centuries are examined and compared!

From the early 14th century, when the trade of pattenmaking was first recorded, the Company has seen the world alter dramatically and this book attempts to place the Pattenmakers within the ever-changing social context of the City of London. It celebrates some of the extraordinary characters that have been Liverymen, and includes a number of vignettes and many illustrations, previously unpublished, which add substance and colour to the past life of the Company.

The modern chapters clearly describe the significant role the Company’s Charitable Trust plays in the areas of education, bespoke footwear training and the provision of hand-made orthopaedic footwear for injured British service personnel and others.

The authors benefited from access to  extensive on-line archive material, a facility unavailable to their predecessors. Previously unknown facts and fascinating background information have been unearthed and verified to make this edition both historically accurate and, hopefully, appealing even to the casual reader.

This is essentially the story of a proud Livery fighting for survival despite the fallout from a dying trade, and subsequently reinventing itself to be a vibrant and relevant force within the City of London. Out of the Mud indeed!

Dr Stephen Cribb A Londoner by birth, a geologist by profession and a historian and genealogist by ­inclination, Liveryman Dr Stephen Cribb is a relatively new entrant into the Pattenmakers. As an ­author, his total immersion into the history of the ­Company and the City of London has proved an extremely rewarding and exciting ­experience.

Court Assistant Steve Huxham, a Livery member since 2008, is a well-known Recruiter, both in the UK and internationally, currently running the recruitment functions for a number of SMEs.  He also serves as a Non-Executive Director for several start-ups.  A lifetime of headhunting experience has proved easily transferable into historical research!

Richard Kottler was ­Master in the Tercentenary Year of 2017/18 and has been a ­Member of the Livery since 1992. His career has mainly been in the clothing and ­footwear sectors, latterly as Chief Executive of the British Footwear Association.